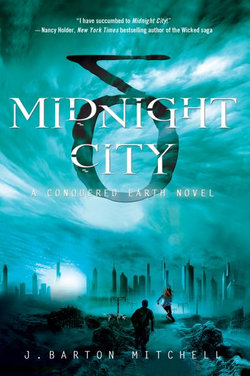 Earth has been conquered by an alien race known as the Assembly. The human adult population is gone, having succumbed to the Tone - a powerful, telekinetic super-signal broadcast across the planet, which has reduced them to a state of complete subservience. But the tone has one critical flaw. It only affects the population once they reach twenty-one or twenty-two years old. This means that there is one group left to fight. Teens. Holt Hawkins is a bounty hunter, and his current target is Mira Toombs, a treasure seeker who has escaped from Midnight City after being sentenced to death. It's not long before Holt bags his prey, but their instant connection isn't something for which Holt bargained. Neither is the Assembly ship that crash-lands near them shortly after he captures Mira. Venturing inside the ship, despite the tied-up Mira's objections, Holt finds a young girl who can't remember anything except her name: Zoey.
The three soon begin an adventure through alien-conquered North America, encountering young freedom fighters, powerful artefacts of strange science that seem like magic, pirates and brigands, and frightening mutated creatures of the night, all while trying to stay one step ahead of the Assembly. Zoey, in the meantime, starts to exhibit amazing powers while Holt and Mira begin to realize that this young girl just may be the key to stopping the alien invaders.

Be the first to review Midnight City.