by Mitchell Starc and Philip Bunting

Join Mitch Starc and his U10’s cricket team in a mighty test when it’s AUSSIES VS ENGLAND! The greatest rivalry of them all!

Mitch Starc’s biggest dream is to one day wear the baggy green and play for Australia. Now it seems his dream has come true early! So what’s Mitch’s problem? He’s pretty sure his team will be FLOGGED by the English side. He just CAN’T get the hang of bowling.

His dad is EMBARRASSING him (and unfortunately his dad is the COACH). His cricket whites have turned PINK! Can it get any WORSE?! Find out in this action-filled, hilarious new series created by cricket superstar Mitchell Starc!

With a classic left-armer’s action and the ability to swing the ball at pace, Mitchell Starc has long been touted as a future star of Australian cricket.

He announced himself in just his second international match, taking 4-27 in an ODI against Sri Lanka at the Gabba in 2010 before me made his Test debut at the same ground the following summer. It wasn’t until 2012 that Starc first picked up a big haul, taking eight wickets for the match against South Africa in Perth, including a beautiful in-swinger that knocked over the off-stump of Proteas legend Jacques Kallis.

He followed it up by bowling Australia to victory against Sri Lanka in Hobart, taking 5-63, before he was controversially rested for the Boxing Day Test. Starc failed to find consistency in 2013 and 2014 as he battled a seemingly constant stream of long-term injuries, but he showed his ability as a batsman with a heartbreaking score of 99 in India and an unbeaten 68 at Old Trafford

Be the first to review Mighty Mitch : Aussies vs England : Game On!. 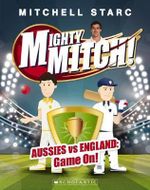 by Mitchell Starc and Philip Bunting