Donna Hay updates the timeless classics and establishes some modern ones.

Modern Classics Book 1 showed readers how to master a roast, make the ultimate meat pie, and whisk up the perfect salad dressing.

Modern Classics Book 2 features the pies, tarts, cakes, puddings and slices of our childhood, as well as the tiramisu and creme brulee of today. It brings our old favourites very much into the 21st century, inspiring the cooks of today and making Donna Hay a name known around the globe.

In each chapter, Donna Hay gives you step-by-step basics, as well as some simple but wonderful recipes to use every day, all accompanied by sumptuous photographs.

No kitchen will be complete without Donna Hay's fantastic modern take on the food everyone would love to cook if only they knew how. Donna Hay is Australia’s favourite and most trusted home cook, and an international food-publishing phenomenon.

Donna’s 27 books have sold more than 6 million copies worldwide, been translated into 10 different languages, and her television cooking shows have brought her signature style to life for viewers in more than 14 countries. In Australia, her recent books have dominated the bestseller charts, with Fresh and Light (2012) selling 202,000, the new classics (2013) selling 160,000, life in balance (2015) selling 114,000 and basics to brilliance (2016) selling 106,000 copies to date.

Donna Hay is a household name. She is editor-in-chief of her own magazine (that’s reached more than 730,000 readers) with a digital version that’s been the number one of its kind in Australia. In addition, her food range is stocked in supermarkets nationally. She is also the working mum of two beautiful boys.

Books by Donna Hay include: basics to brilliance kids; basics to brilliance; life in balance; the new easy; the new classics; Fresh and Light; simple dinners; a cook’s guide; fast, fresh simple.; Seasons; no time to cook; off the shelf; instant entertaining and the simple essentials collection

Be the first to review Modern Classics Book Two. 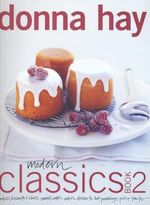 Desserts Donna Hay Australian Books
Hold on while we process your request.