London, BL, Cotton Tiberius A. iii is a compilation manuscript made at Christ Church, Canterbury, (arguably) in 1020-1023. Its ninety-four texts and two illustrations seem to present an incompatible miscellany: a monastic customary and texts concerning pastoral care; private prayers and public liturgical forms; scientific treatises and prognostics. When viewed as a product of the third generation of the English Benedictine Reform, and an episcopate that was almost entirely monastic, however, the codex begins to make sense as a reflection of a reform movement that involved much more than the ejection of some clerks and the establishment of a few Benedictine monasteries and monastic sees. A more thorough-going and longer-lasting attempt to create a Holy Society in England is witnessed in the sum of the reform's achievements - establishing a unified monastic episcopate, recovering and protecting lands and wealth, introducing liturgical innovations, expanding book production and decoration, focusing on teaching and learning, fostering saint cults and the cult of the Cross and developing effective pastoral care - all witnessed in the Tiberius manuscript. The synergy produced by compiling this manuscript demonstrates the breadth of this reform which coupled monasticism with both pastoral care and erudition. The manuscript unites different layers and ages of the reform, not as a reverent enshrinement, but as a living version of their own history; the third generation of reformers continually tweaked and recombined texts, and the contents of this manuscript represent a working body of reformist knowledge and practice.

The British Library is the national library of the United Kingdom and one of the world's greatest research libraries. The Library's collection has developed over 250 years and exceeds 150 million separate items representing every age of written civilization and includes books, journals, manuscripts, maps, stamps, music, patents, photographs, newspapers, and sound recordings in all written and spoken languages.

Among the greatest treasures in the Library's collection are two copies of the Magna Carta from 1215; the Lindisfarne Gospels; Leonardo da Vinci's notebook; the first edition of the Times (London) from 18 March 1788; manuscripts of the Beatles' lyrics; and the recording of Nelson Mandela's speech given at his trial.

Be the first to review Monk-Bishops and the English Benedictine Reform Movement. 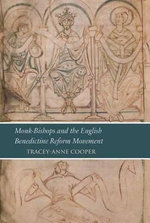