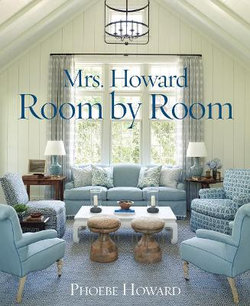 Mrs. Howard, Room by Room is the follow-up to Phoebe Howard's critically acclaimed Joy of Decorating and takes readers even deeper into the design process, revealing the seemingly small but essential tips and tricks that will help them imbue their own homes with Mrs. Howard's celebrated Southern style and taste. The book is divided by room, with chapters addressing living rooms and libraries, bathrooms and kitchens, bedrooms, children's rooms, and even outdoor spaces. Images of the most gorgeous examples of rooms are chosen from more than 12 spectacular homes in locations as diverse as New York City, Nashville, and Atlanta. Mrs. Howard, Room byRoom is sure to capture the hearts of her many fans and will inspire new readers with Southern charm and design ideas.

Phoebe Howard opened her first store, Mrs. Howard, in Jacksonville, Florida, 20 years ago and now has stores in Georgia and North Carolina. Her stores, furnishings, and interiors reflect the essence of coastal style and charm.

Her work is routinely featured in House Beautiful, Coastal Living, Southern Accents, and Veranda. It has also appeared in Elle Decor, InStyle, and the New York Times. Phoebe resides in Jacksonville.