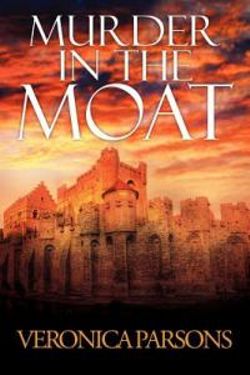 Murder in the Moat 3

Alwyston is a quaint and picturesque village in southern England. It is away from the main thoroughfares and is accessed by one road that leads into and out of the town. This is a narrow road lined with hedgerows and dry-stone walls behind which lie ordered gardens, stone cottages and gentle fields. <br><br> The local landscape also hides a rich archaeology. The expectation of uncovering something of historical value brings many hopeful amateur archaeologists to the village each year. A number of these are aging, retired or semi-retired and spend half the year in Alwyston and half the year in their native Australia. <br><br> As well as its archaeological attractions, Alwyston holds the dubious record for having the highest murder rate in the country. Conveniently for some, these murders only occur in the warmer months, the summer murdering season , as the villagers say. <br><br> Accompanied by the requisite constabulary and an assortment of local identities, the part-time denizens of the village and their friends have solved both archaeological and homicidal mysteries in the past. They fully and enthusiastically intend to do so again in spite of their advancing years and other impediments. <br><br> Madgery Ashfield, a retired psychologist from Australia, arrives in Alwyston in early spring to find her close friend, Winnie, already ensconced in the village. Winnie is staying in the local pub owned by Madgery s good friend, Cedric Drury. She is there for the summer to explore her ancestry in the area. As well as owning the pub, Cedric has been an art importer-exporter and an employee of the FBI. Because of this experience, detectives from Scotland Yard and Interpol often rely on him to help them to solve the seasonal murders. On the evening of her arrival, Madgery is surprised to hear from Cedric and Montegrew Plum the local doctor that the first murder of the summer has occurred just that morning. A young man has been brutally slain in the dried moat of a nearby ruined Norman castle. The circumstances of the murder intrigue the police and university archaeologists, headed by Professor Charles Upton, because the body lies over the exposed skeleton of a Saxon woman. <br><br> Subsequently, with the help of Cedric, Madgery and their friends, they discover that the murder is associated with the recovery of jewels and other valuable artefacts from the moat. This provides sufficient motive for the crime and a possible means of tracing the perpetrator. <br><br> However, on the eve of the arrival of another friend from Australia, the intrepid Oliver Stillov, Cedric s housekeeper, Doris, is murdered in his newly restored Georgian mansion. Doris had interrupted someone removing plaster from the walls of Cedric s library. This murder is deeply felt by the villagers who attend Doris funeral conducted by Bartholemew Pettigrew the vicar. <br><br> Monte who undertakes autopsies of Doris and the young man in the moat is also treating a number of tourists to Alwyston who have been poisoned by eating sweets purchased in the village. The poison was introduced to the sweets through honey provided by Cedric who keeps hives in the field behind his pub. Two of the sick tourists succumb to the poison. <br><br> It becomes more complicated when another, but antipathetic refugee from Australia, Helga van Reich stalks the friends. Darren Thompson, her friend, often accompanies her. Helga has chosen a grotesque disguise to achieve her objectives and has settled in an unsavoury guesthouse just outside Alwyston run by the obsequious Steven Swineton. <br><br> A famous television team of archaeologists, with the help of the friends and local university academics, exposes the archaeology in the moat. This requires some division of time for Cedric, Oliver, Madgery and their friends between solving the murders and undertaking the archaeological work. Fortunately, Detective Inspector Bill Strangman arrives from New Scotland Yard and a breakthrough in the murder

Murder in the Moat