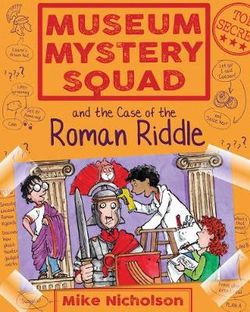 Museum Mystery Squad and the Case of the Roman Riddle

"Some people think that museums are boring places full of glass cases, dust and stuff no one cares about: wrong! In a hidden headquarters below the exhibits there's a gang ready to handle dangerous, spooky or just plain weird problems: the Museum Mystery Squad.

Techie-genius Nabster, mile-a-minute Kennedy and sharp-eyed Laurie (along with Colin the hamster!) tackle the surprising conundrums happening at the museum. From pre-historic creatures that move and secret Egyptian codes to missing treasure and strange messages from the past, there's no brain-twisting, totally improbable puzzle the Squad can't solve.

Strange lights, eerie sounds -- something spooky is happening at the museum. The ghostly goings-on center on a dented Roman helmet. Could it be haunted? The Squad aren't convinced but what better place is there for a ghost to hide than in a museum full of seriously old and rather dead things?

In theCase of the Roman Riddle, the Squad investigate ancient treasure, mystery mosaics and suspicious centurions to try to solve their latest mystery.

Young readers will love the riddles, red herrings and big reveals jam-packed into this fun-filled series of mystery stories by Mike Nicholson. The enjoyable extras like wacky facts and activities, as well as zany illustrations by Mike Phillips, will keep amateur detectives entertained for hours.

Be the first to review Museum Mystery Squad and the Case of the Roman Riddle.

Museum Mystery Squad and the Case of the Roman Riddle

by Mike Nicholson and Mike Phillips