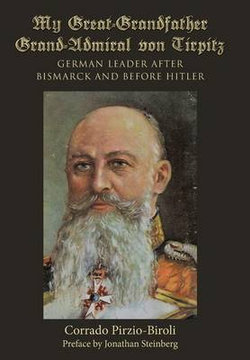 German Leader after Bismarck and Before Hitler

Corrado Pirzio-Biroli offers a robust defense of the life and career of his great-grandfather, Grand-Admiral Alfred von Tirpitz, in this engaging family history.

As the creator of the modern German navy, the trusted adviser of Wilhelm II for two decades, and an "eminence grise" during the Weimar Republic, Tirpitz was a central figure in European politics for several decades.

While Tirpitz agonized about Hitler's rising power, he could not prevent it, and he felt as though he was too old to assume dictatorial powers. If he had done so, he would have liked to have upheld the Reichstag, which he had always shown respect and counted on.

Drawing on personal recollections, unpublished family papers, and thoughtful analysis, the text reveals how Tirpitz had to adapt to a rapidly changing world in which his country went from being a juggernaut that traditional powers tried to rein in to a pariah nation.

Trace four generations of one of Europe's most interesting families, and discover how Tirpitz proved to be a visionary leader in this account of one of history's most misunderstood and important figures.

Be the first to review My Great-Grandfather Grand-Admiral Von Tirpitz.