Ruth Paul lives in an off-grid, straw-bale house on a farm just outside Wellington, New Zealand. As well as writing and illustrating children's picture books, Ruth has worked as a costume illustrator for Peter Jackson movies.

She has two teenaged sons and is actively involved in her local community, having previously chaired her local Community Board and School Board of Trustees.

Over the years, Ruth achieved a Bachelor of Arts majoring in English and History from Victoria University, a Diploma in Visual Communication Design from Wellington Polytech (now Massey University), and most of a law degree.

Ruth started writing and illustrating her own picture books in 2004 and has created over 15 titles. The King's Bubbles won the NZ Post Children's Choice picture book award in 2008, and three of her books have made the Storylines Notable Book list over the years. Stomp was a finalist in the NZ Post Book Awards 2012, and Bad Dog Flash was selected for the US Kid's Indie Next List in 2014.

Her books have sold in New Zealand, Australia, USA, Canada, the UK, China and Korea, with translations in 5 languages. Her original picture book illustrations have contributed to touring exhibitions for Painted Stories (previously Te Tai Tamariki Trust) and two are held in the prestigious Mazza Collection at the University of Findlay, Ohio.

Ruth says every new book is a challenge and presents the opportunity to get better at the craft she wholeheartedly loves.

Be the first to review My Meerkat Mum. 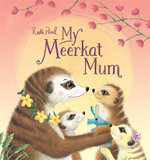