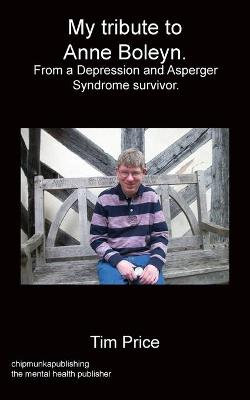 My tribute to Anne Boleyn

I have always been interested in Anne Boleyn. She was a victim, in my opinion, of a political conspiracy and a royal desire for a male heir. This book will give the reader a broader insight into my view of the life of Anne Boleyn. A lot of the opinions are my own and not necessarily meant to be historically accurate. In my opinion, the things she was accused of were almost certainly not true. Anne's life was all too short but she gave birth to Elizabeth 1st, who was one of England's longest serv-ing monarchs. My interest in Anne Boleyn has been of some help to me in my mental health issues and my Asperger's syndrome. It has been a lifelong interest, I can identify with her and her struggles.

I was affected by lack of Oxygen when I was born and was first diagnosed with a mental health problem in 1990 it was called Depression which people can develop several different kinds of Mental health needs issues or problems they may need the experience of medical staff in hospitals like the Priory, Leighton, or Macclesfield. I later discovered that I had Asperger's Syndrome. I received help from staff with experience of mental health issues. Recovery took a long time with help from hospitals, carers from the Mental Health Unit, my friends and family. Am normally a positive, happy person and I join in activities whenever I can.

Anne Boleyn was married to King Henry the 8th. She was his 2nd queen, number 2 of the 6 wives of King Henry the 8th. I am very happy to write a new book about the life of Anne Boleyn. She was aged 35 when she was beheaded, she died on the 19th of May 1536. The things she was accused of when she died were almost certainly not true and because of the still born male air to the throne died when it was born king henry the 8th decided to go ahead and order the murder of Anne Boleyn. she was a faithful queen to henry the 8th. She was born in 1501. Her friend betrayed her and she became one of England best Queens of England. She died in London, England on the 19th of May 1535. Anne Boleyn had a secret lover called Henry Percy who was secretly engaged to Anne Boleyn in 1523 but he did not acknowledge the engagement he was the 5rh earl of Northumberland and the relationship was broken off. Because he refused the engagement to Anne Boleyn. Henry and Anne was formally married on the 25th of January 1533 a big day in the life of Anne and Henry the 8th. Henry the king of England had Anne investigated for treason which was high treason in April 1536. On the 4th of May 1536 she was arrested and was put in the Tower of London. She was put on trial and be-fore a Jury to be tried and she was found guilty and she was beheaded on the 19th of May 1536. It is 484 years since she was executed and beheaded it will be 500 years since her death in 2036 on the 19th of May 1536 I As her daughter Elizabeth became queen of England in 1558. She was a good queen of England. And Anne became venerated as a martyr of the English Reformation.

Be the first to review My tribute to Anne Boleyn.

My tribute to Anne Boleyn