No Cure for Love

At first, newly successful British TV star Sarah Broughton thinks the letters she has been receiving are from a typical fan. Someone harmless, though a little strange. But when her admirer starts threatening Sarah and her loved ones, she turns to detective Arvo Hughes of the LAPD Threat Management Unit - expert in pursing the most dangerous of stalkers. Pitted against a frighteningly twisted mind, the policeman tests his expertise and experience to the limit in the desperate race to save Sarah's life.

The first series aired in Autumn 2011 with an adaptation of Friend of the Devil, the second in Autumn 2012, and the third in February 2014, with the show consistently pulling in ratings of over 5 million.

Peter's recent standalone novel Before the Poison won the IMBA's 2013 Dilys Award as well as the 2012 Arthur Ellis Award for Best Novel by the Crime Writers of Canada. This was Peter's sixth Arthur Ellis award.

His critically acclaimed DCI Banks novels have won numerous awards in Britain, the United States, Canada and Europe, and are published in translation all over the world.

Peter grew up in Yorkshire, and now divides his time between Richmond and Canada.

Be the first to review No Cure for Love. 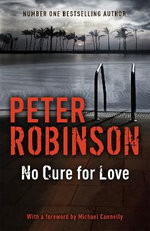 No Cure for Love

Crime & Mystery Thriller / suspense Fiction For Him For Crime Lovers Gift Guide
Hold on while we process your request.