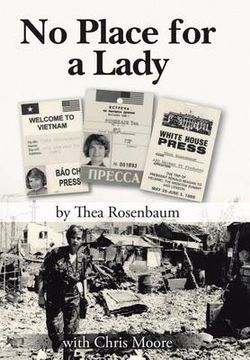 No Place for a Lady

No Place for a Lady charts Thea Rosenbaum's turbulent life from a little girl escaping the Soviet Army with her mother in Berlin in 1945 to becoming Germany's first woman stock broker at Oppenheimer and Co. to Germany's only woman war correspondent in Vietnam. She then embarked on a career as producer for ARD German television in the US, where she was White House pool producer for foreign correspondents from the late '70s to late 2000s. In this capacity, she traveled with five presidents and was present in Germany for the end of the Cold War as the Berlin Wall fell. Her life, as a civilian, correspondent, and producer, bookends and charts the greatest conflict of the later half of the twentieth century.

As she rose in the ranks of a difficult career, she was constantly overcoming her sense of inferiority, ugliness, and even stupidity. While becoming a journalist was always something she aspired to, as a young lady, she believed she was too stupid to achieve it, and yet she was able to succeed in every facet of the work for five decades. At every point in her historic career, she overcame the under-expectations and prejudices of her contemporaries as well as, and most especially, her own inner weakness and self-deprecation.

As to the history she witnessed, she gathered chocolate in the streets of Berlin that the Americans dropped during the Berlin Airlift. As a West Berliner, she was there the night the barbed wire first went up, hardening the East/West divide. Later, and as a journalist, she was in Khe-Sanh in '68 when it was the focus of attack by the NVA until the Tet Offensive began, when she reported on the NVA and Vietcong attacks from Nam O, Hue, and Saigon. She was the first woman to report from a nuclear submarine. She covered the Carter administration for the Camp David Accords as well as reporting from Cairo when the deal was finalized.

No Place for a Lady also reveals many of Thea's funny, and sometimes not, interactions with America's greatest journalists.

Be the first to review No Place for a Lady.

No Place for a Lady