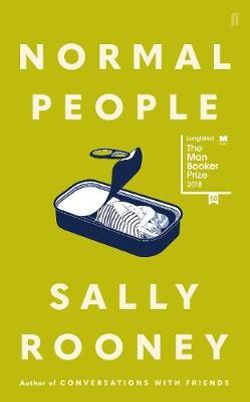 Winner of the 2018 Costa Prize for Best New Novel

The feverishly anticipated second novel from the young author of 2017's most acclaimed debut Conversations with Friends.

Connell and Marianne grow up in the same small town in rural Ireland. The similarities end there; they are from very different worlds. When they both earn places at Trinity College in Dublin, a connection that has grown between them lasts long into the following years.

This is an exquisite love story about how a person can change another person's life - a simple yet profound realisation that unfolds beautifully over the course of the novel. It tells us how difficult it is to talk about how we feel and it tells us - blazingly - about cycles of domination, legitimacy and privilege. Alternating menace with overwhelming tenderness, Sally Rooney's second novel breathes fiction with new life.

Irish author Sally Rooney dazzled readers worldwide last year with her brilliant debut Conversations With Friends, but the cool ease with which she has produced her second book shows an author more determined to write good prose and lots of it than to prove herself as a standout literary talent. Rooney’s talent doesn’t need proving though - her beautiful new book Normal People speaks for itself.

Normal People begins quietly enough in a small Irish town in Sligo, where Marianne lives with her family in a mansion and Connell is the son of the woman who cleans it. What starts out as tentative flirting between them grows into an on-and-off relationship that can never seem to shake off the shackles of teenage insecurity, even as they leave Sligo for student life in Trinity College, Dublin. Connell’s self-consciousness about his working-class background and the psychological fallout of Marianne’s oppressive childhood colour their relationship well into their college years as they drift together and apart in a cycle that’s dysfunctional yet somehow totally self-affirming. This is an intense and complicated love story, but Rooney is an exceptional writer who explores Marianne and Connell’s relationship with incredible delicacy. Her characters are so richly drawn that you feel their emotions as if they were your own.

I simply cannot get this book out of my head, but nor do I want to - it really is just that good.

Sally Rooney was born in 1991 and lives in Dublin. Her work has appeared in the New Yorker, Granta, The White Review, The Dublin Review, The Stinging Fly, Kevin Barry's Stonecutter and The Winter Page anthology.

Her debut novel, Conversations with Friends, was the most popular debut in the 2017 end-of-year round-ups. Rooney was shortlisted for the Sunday Times EFG Short Story Award for 'Mr Salary' and was the winner of the Sunday Times/PFD Young Writer of the Year Award.