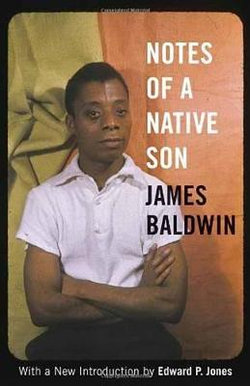 Notes of a Native Son

#26 on The Guardian's list of100 best nonfiction books of all time, the essays explore what it means to be Black in America

In an age of Black Lives Matter, James Baldwin's essays on life in Harlem, the protest novel, movies, and African Americans abroad are as powerful today as when they were first written. With films like I Am Not Your Negroand the forthcoming If Beale Street Could Talkbringing renewed interest to Baldwin's life and work, Notes of a Native Son serves as a valuable introduction.Written during the 1940s and early 1950s, when Baldwin was only in his twenties, the essays collected in Notes of a Native Son capture a view of black life and black thought at the dawn of the civil rights movement and as the movement slowly gained strength through the words of one of the most captivating essayists and foremost intellectuals of that era. Writing as an artist, activist, and social critic, Baldwin probes the complex condition of being black in America. With a keen eye, he examines everything from the significance of the protest novel to the motives and circumstances of the many black expatriates of the time, from his home in "The Harlem Ghetto" to a sobering "Journey to Atlanta."

Notes of a Native Soninaugurated Baldwin as one of the leading interpreters of the dramatic social changes erupting in the United States in the twentieth century, and many of his observations have proven almost prophetic. His criticism on topics such as the paternalism of white progressives or on his own friend Richard Wright's work is pointed and unabashed. He was also one of the few writing on race at the time who addressed the issue with a powerful mixture of outrage at the gross physical and political violence against black citizens and measured understanding of their oppressors, which helped awaken a white audience to the injustices under their noses. Naturally, this combination of brazen criticism and unconventional empathy for white readers won Baldwin as much condemnation as praise.

Notes is the book that established Baldwin's voice as a social critic, and it remains one of his most admired works. The essays collected here create a cohesive sketch of black America and reveal an intimate portrait of Baldwin's own search for identity as an artist, as a black man, and as an American.

James Baldwin was born and educated in New York. Go Tell It on the Mountain, his first novel, was published in 1953. Evoking brilliantly his experiences as a boy preacher in Harlem, it was an immediate success and was followed by Giovanni's Room, which explores the theme of homosexual love in a sensitive and compelling way.

Another Country (1963) created something of a literary explosion and was followed in 1964 by two non-fiction books, Nobody Knows My Name and Notes of a Native Son, which contain several of the stories and essays that brought him fame in America. Nobody Knows My Name was selected by the American Library Association as one of the outstanding books of its year. Going to Meet the Man was James Baldwin's first collection of stories.

James Baldwin won a number of literary fellowships: a Eugene F. Saxon Memorial Trust Award, a Rosenwald Fellowship, a Guggenheim Fellowship, a Partisan Review Fellowship, and a Ford Foundation Grant-in-Aid. He was made a Commander of the Legion of Honour in 1986. He died in 1987.

The Times obituary declared, 'The best of his work ... stands comparison with any of its period to come out of the United States,' while Newsweek described him as 'an angry writer, yet his intelligence was so provoking and his sentences so elegant that he quickly became the black writer that white liberals liked to fear'.

Be the first to review Notes of a Native Son.

Notes of a Native Son