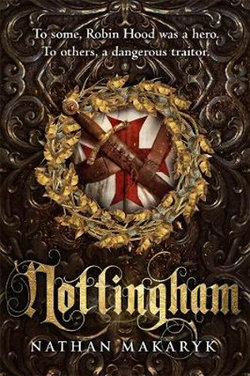 Nathan Makaryk's debut novel is a gripping historical epic - full of action, intrigue and adventure - and a fascinating retelling of the Robin Hood legend.

Nottingham mixes history and myth into a compelling novel of power, ambition and heroism - one that twists and turns far beyond the traditional tale of Sherwood Forest's iconic thief.

England, 1191. King Richard is half a world away, fighting for God and his own ambition.

Back home, the country languishes, bankrupt and on the verge of anarchy. People with power are running unchecked. People without are growing angry. And in Nottingham, the largest and wealthiest shire in England, a dangerously passive sheriff seems intent on doing nothing.

As the leaves turn gold in the Sherwood Forest, the lives of six people - Robin and William, soldiers running from their pasts; Marian, a noblewoman working for change; Arable, a servant girl with a secret; Guy of Gisbourne, a beleaguered guard captain; and Elena Gamwell, a brash, ambitious thief - become intertwined.

And a strange story begins to spread.

"Nottingham is like reading Game of Thrones for the first time...except it's a leap beyond that"
K.A. Doore, author of The Perfect Assassin

"This is one of those special books. It's not one you borrow, it's one you keep on your shelf forever"
Sarah J. Sover, author of Double-Crossing the Bridge

"A remarkable and comprehensive story...this is unique fiction that compels revision of the Robin story and its place in history"
The Historical Novel Society

"Nathan Makaryk's bold reimagining of the Robin Hood legend is the most pleasurable reading experience I've had since first discovering George R.R. Martin's A Song of Ice and Fire. Nottingham is an expansive, thoroughly engrossing epic with vividly drawn characters and rich historical detail. I can't wait to read the next installment."
Bryan Cogman, Co-Executive Producer/Writer, Game of Thrones

Be the first to review Nottingham.