Of Orcas and Men

What Killer Whales Can Teach Us

The orca otherwise known as the killer whale is one of earth's most intelligent animals. Remarkably sophisticated, orcas have languages and cultures and even long term memories, and their capacity for echolocation is nothing short of a sixth sense. They are also benign and gentle, which makes the story of the captive orca industry and the endangerment of their population in Puget Sound that much more damning.
In Of Orcas and Men, a marvellously compelling mix of cultural history, environmental reporting, and scientific research, David Neiwert explores an extraordinary species and its occasionally fraught relationship with human beings. In the tradition of Barry Lopez's classic Of Wolves and Men, David Neiwert's book is a triumph of reporting, observation, and research, and a powerful tribute to one of the animal kingdom's most remarkable members.

David Neiwert is an investigative journalist based in Seattle and a contributing writer for the Southern Poverty Law Center.

He is the author of Of Orcas and Men, And Hell Followed With Her, The Eliminationists, Strawberry Days, Death on the Fourth of July, and In God 's Country. He is also co-author, with John Amato, of Over the Cliff. He is senior editor at CrooksandLiars.com and blogs at Orcinus.

Be the first to review Of Orcas and Men. 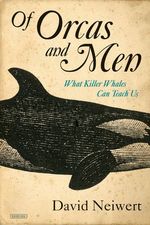 Of Orcas and Men