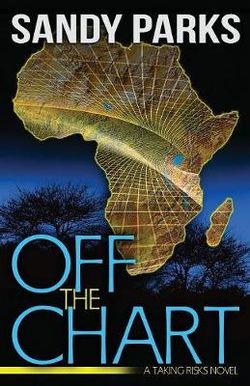 OFF THE CHART is a 2017 Winner of the Maggie Award of Excellence.

Joni Bell's life as a former American military helicopter pilot has grown complicated. The only way to rescue a spy she's come to love and keep a promise to a child whose father is a political prisoner in Africa, is to assist the American CIA. Can she do all this while trying to keep one step ahead of a traitor in her midst?

Former Special Forces soldier Ian Taljaard is avoiding Zimbabwean intelligence (CIO). They want him stopped after he aided the imprisoned finance minister in uncovering government corruption and secrets they need to keep buried. Now Ian's pressing goal is to find where the CIO is keeping the minister and free him. The last thing Ian wants is for captivating American Joni Bell to risk coming back to where the CIO wants her dead. Yet Joni does return, with support from the American CIA and unwelcomed help from a fellow pilot assigned as her escort. Ian fears the duplicitous CIA is hiding the true mission once again and that Joni's coworker harbors secrets...secrets with the potential to kill.

If you love adventure thrillers with a dash of espionage, heroines whose brains are as important as their brawn, and heroes with enough guts to do the right thing, then you'll enjoy Off the Chart. Read the book today by author of Repossessed, winner of the 2013 Daphne du Maurier Mainstream Mystery/Suspense Award and 2013 Maggie Award of Excellence.

OTHER BOOKS by Sandy Parks

To Kill Again (Soldiers of the Umbra Novel)

Be the first to review Off the Chart.