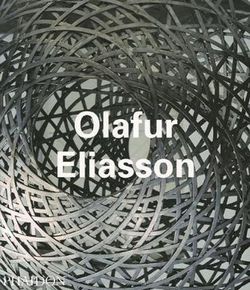 by Daniel Birbaum, Olafur Eliasson,  Henri Bergson and others

Based in Berlin, the artist rebuilds in the gallery fragments of the environment: icebergs at the Musee d'Art Moderne de la Ville de Paris and windmills at the Louisiana Museum in Humlebaek, Denmark.

For Eliasson, immaterial sensations such as temperature, smell, taste, air and magnetic waves become sculptural elements when presented in an artistic context. Nominated in 2002 for the prestigious Hugo Boss prize, Eliasson has become a favourite in the sphere of contemporary art in recent Biennales.

In her Survey, curator Madeleine Grynsztejn examines the unique position of this new artist, overlapping technological and artistic innovation in the creation of his art. Curator and critic Daniel Birnbaum discusses with the artist the role of location and the immediate environment in both his gallery (indoor) and remote-site (outdoor) work. In his Focus, architectural theorist Michael Speaks looks at the work Green River (1998), particularly in relation to Antonioni's 1964 film, Red Desert.

The artist has selected an extract from Henri Bergson's Creative Evolution (1907) dealing with our subjective, visual response to nature, a central theme in the artist's own work. Eliasson's writings include essays on that most banal of topics, the weather, and an open letter entitled 'Dear Everybody', addressed to viewers of his sensual, layered artworks.

Daniel Birnbaum is a contributing editor to Artforum and the author of several books on art and philosophy, including The Hospitality of Presence: Problems of Otherness in Husserl's Phenomenology (1998) and Production (2000, with the artist Carsten Holler).

From 1998 to 2000 he was the Director of IASPIS, an artists' residency programme based in Stockholm. Since January 2001 he has been the Director of Portikus and the Stadelschule Art Academy, both in Frankfurt.

Olafur Eliasson is an Icelandic-Danish artist.

His work ranges from installation and sculpture to photography, film, and built environments, and has been exhibited worldwide in institutions such as MoMA, Tate Modern, and the Venice Biennial.

He works and lives in Copenhagen and Berlin.

Madeleine Grynsztejn is Senior Curator of Painting and Sculpture at the San Francisco Museum of Modern Art.

She was previously Curator of the 1999 Carnegie International and Curator of Contemporary Art at the Carnegie Museum of Art since 1997.

Michael Speaks is an architectural theorist who has taught in the graphic design department at the Yale School of Art and in the architecture departments at Harvard University and Columbia University, among others.

He is currently Graduate Program Head at SCI-Arc, Los Angeles. The founding editor of Polygraph and Senior Editor at ANY magazine in New York, he was also the Series Editor for Writing Architecture, published by the MIT Press.

Speaks has edited several books on contemporary architecture and culture including The Critical Landscape (1997).

Be the first to review Olafur Eliasson. 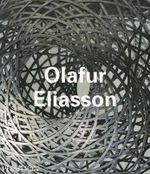 by Daniel Birbaum, Olafur Eliasson,  Henri Bergson and others