One Night a Week

MusicalCharacters: 1 male, 9 femaleA revised version of the hit musical Stepping Out, this good-natured comedy from Richard Harris chronicles several months in the life of a beginning dance class. Each of the eight students, who come from a variety of backgrounds, has his or her own reason for joining. For instance, Maxine, a confident, fast-talking saleswoman (and former Ovaltine dancer), is there on doctor's orders, while self-sacrificing Andy participates because it is the only thing she does for herself. Whatever the cause, they make a point of coming every week to chat, relax and, if they can manage to, learn a couple of dance steps. Led by Mavis, their eternally patient instructor, and accompanied by the acerbic pianist Mrs. Fraser, the students (who range from hopeless to competent) strive to master the basics of dance. But the steps and routines are just the background for the real focus of the play - the relationships and interactions of these ten very different people. By their final performance, not only have the class members developed some degree of skill, but they have also overcome the inhibitions, awkwardness and personality conflicts that have kept them out of sync.

Be the first to review One Night a Week. 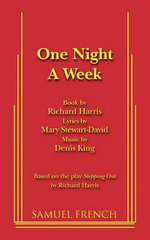 One Night a Week