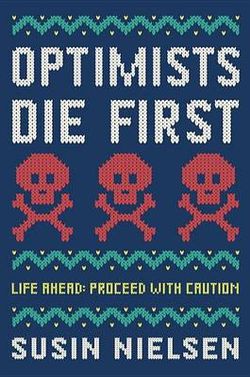 by Susin Nielsen
Hardback
Publication Date: 21/02/2017
Be the first to write a review
Tweet

Award-winning author Susin Nielsen has written a laugh-out-loud and heartrending novel for fans of Robyn Schneider's Extraordinary Means and Cammie McGovern's Say What You Will.

Beware: Life ahead. Sixteen-year-old Petula de Wilde is anything but wild. A former crafting fiend with a happy life, Petula shut herself off from the world after a family tragedy. She sees danger in all the ordinary things, like crossing the street, a bug bite, or a germy handshake. She knows: life is out to get you. The worst part of her week is her comically lame mandatory art therapy class with a small group of fellow misfits. Then a new boy, Jacob, appears at school and in her therapy group. He seems so normal and confident, though he has a prosthetic arm; and soon he teams up with Petula on a hilarious project, gradually inspiring her to let go of some of her fears. But as the two grow closer, a hidden truth behind why he's in the group threatens to derail them, unless Petula takes a huge risk. . . Praise:
"Nielsen writes with sensitivity, empathy, and humor." --Kirkus Reviews, Starred "Nielsen excels at depicting troubled, clever teenagers in familiar environments." --School Library Journal, Starred " An] empathic and deeply moving story, balanced by sharply funny narration and dialogue." --Publishers Weekly, Starred "A poignant exploration into the nuances of healing." --Quill and Quire, Starred

Susin Nielsen got her start feeding cast and crew on the popular television series, Degrassi Junior High. They hated her food, but they saw a spark in her writing. Nielsen went on to pen sixteen episodes of the hit TV show.

The Reluctant Journal of Henry K. Larsen won the prestigious Governor General’s Literary Award, the Canadian Library Association’s Children’s Book of the Year and many Young Readers’ Choice Awards. She lives in Vancouver with her family and two extremely destructive cats.

Be the first to review Optimists Die First.