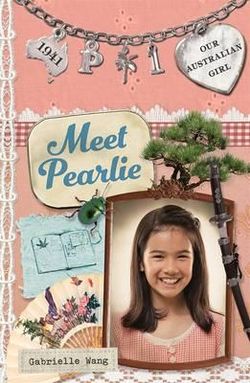 Meet Pearlie and join her adventure in the first of four exciting stories about a courageous girl in a world at war.


It's 1941 . . . and the war is changing Pearlie's life every day. Darwin is full of soldiers, there's a spy on the loose, and people are turning against Pearlie's best friend, Naoko, just because she's Japanese. When everything falls apart, will Pearlie be brave enough to stick up for what's right, or will her old fears get the better of her?

Meet Pearlie and join her adventure in the first of four exciting stories about a courageous girl in a world at war.

Gabrielle Wang is an author and illustrator born in Melbourne of Chinese heritage. Her maternal great grandfather came to Victoria during the Gold Rush and her father from Shanghai. Her stories are a blend of Chinese and Western culture with a touch of fantasy.

Her first young adult novel, Little Paradise also received a Highly Commended in the 2011 Prime Minister's Awards. Gabrielle's picture book The Race for the Chinese Zodiac (2010) illustrated by Sally Rippin and Regine Abos was a Notable Book in the CBCA Awards for 2011 and shortlisted for the 2011 YABBA and WAYBRA awards. Her latest books are part of the highly successful 2011 Our Australian Girl series published by Penguin - Meet Poppy, Poppy at Summerhill, Poppy and the Thief and Poppy Comes Home.

Gabi's latest book for middle readers is The Beast of Hushing Wood.