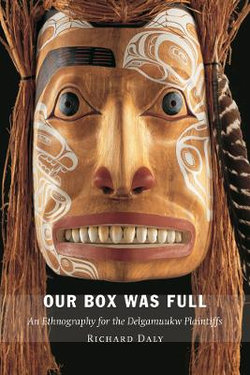 Our Box Was Full

An Ethnography for the Delgamuukw Plaintiffs

For the Gitksan and Witsuwit'en peoples of northwest British Columbia, the land is invested with meaning that goes beyond simple notions of property or sustenance. Considered both a food box and a storage box of history and wealth, the land plays a central role in their culture, survival, history, and identity. In Our Box Was Full, Richard Daly explores the centrality of this notion in the determination of Aboriginal rights with particular reference to the landmark Delgamuukw case that occupied the British Columbia courts from 1987 to 1997.

Called as an expert witness for the Aboriginal plaintiffs, Daly, an anthropologist, was charged with helping the Gitksan and Witsutwit'en to "prove they existed," and to make the case for Aboriginal self-governance. In order to do this, Daly spent several years documenting their institutions, system of production and exchange, dispute settlement, and proprietorship before Pax Britannica and colonization. His conclusions, which were originally rejected by Justice MacEachern, were that the plaintiffs continue to live out their rich and complex heritage today albeit under very different conditions from those of either the pre-contact or fur trade eras.

Our Box Was Full provides fascinating insight into the Delgamuukw case and sheds much-needed light on the role of anthropology in Aboriginal rights litigation. A rich, compassionate, and original ethnographic study, the book situates the plaintiff peoples within the field of forager studies, and emphasizes the kinship and gift exchange features that pervade these societies even today. It will find an eager audience among scholars and students of anthropology, Native studies, law, and history.

Be the first to review Our Box Was Full.

Our Box Was Full