The Art of Eavesdropping

Overheard
by Oslo Davis
Not in stock...
Paperback / softback
$19.99

Every week since 2007, Oslo Davis has been eavesdropping on people in the city of Melbourne, Australia, and recording what he hears in a cartoon for The Age newspaper. His wry observations have earned him a cult following, and ten years on he has become a beloved fixture.

Now, for the first time, his Overheard cartoons have been collected in a hilarious compilation, with chapters covering Family Matters, Modern Life, Relationships, The Daily Grind, Friends Like These and What The.

Transported through the city by Oslo’s nimble pen, we listen in to the daughter telling her mother not to interfere in party preparations, the fat man pondering what is least bad to eat, and the hipster commenting on what is truly hip. Overheard is a hysterical collection with universal appeal.

Be the first to review Overheard. 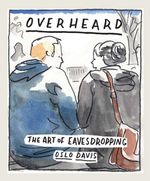 Cartoons & comic strips The arts Humour and Pop Culture
Hold on while we process your request.