From the Gothic imagination behind Cronos, Mimic, Blade II, Hellboy, Pacific Rim, Crimson Peak, and Trollhunters arises a ghost story and a fairy tale unlike any other...

During the 2000s, Guillermo del Toro directed, wrote, and produced two films held by secrets of the past, The Devil's Backbone (2001) and Pan's Labyrinth (2006), both of which garnered international acclaim and broke records for Spanish features. Exploring -childhood fears of mortality and abandonment in the same way the brothers Grimm and Hans Christian Andersen might- (The New York Times), The Devil's Backbone and Pan's Labyrinth ranked among the best films of the decade.

For the first time, editor Danel Olson approaches these movies as cinematic siblings whose quests are bound together, revealing how each questions and answers the other in over 400 lavish pages. In addition to interviews, never-before-seen photographs, and concept drawings, international scholars offer ten essays on the themes of philosophy, sex, metaphor, feminism, fascism, music, fantasy, ghosts, and history in the films, as well as del Toro's literary and artistic influences.

Sharing reflections on making the movies are fourteen of the actors and four key members of the crew. Del Toro himself muses on the struggle to follow his film-dreams, Ivana Baquero (Ofelia) contemplates the deeper lessons of magic, and Fernando Tielve (Carlos) portrays the supernatural reality of being inside del Toro's art.

Through stories and sources unavailable until now, this volume brings scholars, cinephiles, and collectors closer to the most impassioned film-alchemist of our time. Del Toro emerges as a man of multitudes: a -cinematic creator and father, - a -madman, - a -crazy genius, - a -very naughty boy, - a -storytelling monster, - and -the one who changed my life forever.- The Devil's Backbone and Pan's Labyrinth is an indispensable exploration of two of the early 21st century's key films.

Be the first to review Pan's Labyrinth. 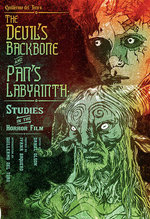