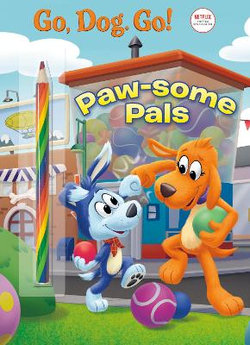 by Golden Books
Paperback
Publication Date: 17/08/2021
Be the first to write a review
Tweet

Join Tag, Scooch, and all their paw-some pals in a colorful adventure around Pawston! Boys and girls ages 3 to 7 will love this activity book featuring the characters from Netflix's Go, Dog. Go! animated series-plus a rainbow pencil that writes in four different colors!

Go, Dog. Go! is a Netflix animated series for preschoolers about a 6-year-old dog and her adventures in a joyful, fun-loving community of dogs on the go!

Over two billion Little Golden Books have reached the hands of children all over the world.

Who hasn't heard of The Poky Little Puppy, star of the best-selling Little Golden Book of all? It has sold well over 15 million copies worldwide, in many different languages.

Be the first to review Paw-Some Pals (Netflix: Go.