Learning, Emotion, and the Recited Qur'an in Indonesia

The last decade has seen widespread Islamic religious revitalization in Southeast Asia, a region with a Muslim population almost as large as that of the entire Arabic-speaking Middle East. One such movement in 1990s Indonesia promoted engagement with the Qur'an through memorization, reading, skilled performance, and popular competitions in recitation. This movement drew on longstanding structures of Islamic education and piety, social interests, Southeast Asian patterns of performance and aesthetics, and unique features of the Qur'an itself. Based on fieldwork in South Sulawesi and elsewhere in Indonesia, Perfection Makes Practice vividly portrays Indonesian Muslims' committed practice of perfecting their own (and others') Qur'anic piety. What sustains such voluntary and energetic Qur'anic practice at both the individual and collective levels? Anna Gade concludes that ""moods and motivations,"" foundational to the definition of religion given by Clifford Geertz, progressively compel Indonesian Muslims' interest to undertake longterm projects to improve their ability to recite the Qur'an.

Be the first to review Perfection Makes Practice. 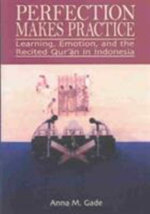 Islam Philosophy of religion
Hold on while we process your request.