Reteaming a decade after their award-nominated first collaboration, Bruen and Starr complete the saga of wannabe druglord Max Fisher and his one-time assistant Angela, now working in the capital of sin and depravity: Hollywood.

Ruined and on the lam, former drug kingpin Max Fisher stumbles upon the biggest discovery of his crooked life: a designer drug called PIMP that could put him back on top. Meanwhile, a certain femme fatale from his past is pursuing a comeback dream of her own, setting herself up in Hollywood as producer of a series based on her and Max’s life story. But even in La-La Land, happy endings are hard to come by, especially with both the cops and your enemies in the drug trade coming after you…

About the Authors
Ken Bruen born in Galway in 1951, is the author of The Guards (2001), the highly acclaimed first Jack Taylor novel. He spent twenty-five years as an English teacher in Africa, Japan, S.E. Asia and South America. His novel Her Last Call to Louis Mac Niece (1997) is in production for Pilgrim Pictures, his White Trilogy has been bought by Channel 4, and The Guards is to be filmed in Ireland by De Facto Films.

Jason Starr has won raves for his work from publications ranging from The New York Times to Entertainment Weekly, which compared him to Jim Thompson and James M. Cain. In 2004, he received the Barry Award for his novel Tough Luck, and in 2005 he won the Anthony Award for Twisted City. He also writes comics for Marvel and DC, as well as original graphic novels. He lives in New York City.

Ken Bruen is one of the most prominent Irish crime writers of the last two decades. Born in Galway, he spent twenty-five years travelling the world before he began writing in the mid 1990s.

Be the first to review Pimp . 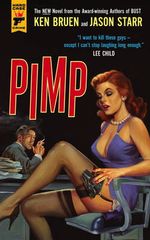