by Rob Childs, Peter Foster,  Julia Donaldson and others

Julia Donaldson is a top selling author of children’s books with over 65 million books sold worldwide. Among her greatest successes are Room on the Broom, The Gruffalo and Stick Man (all illustrated by Axel Scheffler), What the Ladybird Heard (illustrated by Lydia Monks) and The Giant Jumperee (illustrated by Helen Oxenbury). Julia’s books have been translated into over 72 languages.

Julia lives in the UK with her husband Malcolm and divides her time between Sussex in the South and Edinburgh in Scotland. From 2011 to 2013, she was the UK Children’s Laureate. Julia writes fiction, poems, plays and songs, as well as picture books. The TV films of The Gruffalo and Room on the Broom have both been nominated for Oscars.

Escaped teacher, now writing for children with 46 books published so far, ranging from early reading material to teenage novels. I've written 4 books for Franklin Watts, 4 for Wayland and one for Hodder.

I'm married with two grown up children and five grandchildren, no pets, though I used to have three beautiful cats, guinea pigs and rabbits. When I was a child, we kept chickens and I loved them, too.

I always have my nose in a book. I read both adult's and children's books. My favourite children's books include The Railway Children by E Nesbit, Journey to the River Sea by Eva Ibbotson, River on the Say by Philippa Pearce. My adult reading varies from Charles Dickens to many modern authors. I enjoy listening to music, classical, jazz and some pop.

Bill Condon has written numerous stories, poems, and plays for children, and four of his novels have been shortlisted for the Children’s Book Council of Australia Book of the Year Award. He is also the winner of the Prime Minister’s Literary Award. Bill lives on the south coast of New South Wales with his wife, the well-known children’s writer Dianne Bates.

Adam Guillain is a performance storyteller and was the Roald Dahl Museum and Story Centre Writer in Residence.

Jeremy Strong is one of the UK’s highest profile authors for young readers and has a particular gift for humour which has seen him crowned Puffin’s King of Comedy.

He worked as a Head teacher before writing full-time and he has won a raft of awards including the Red House Children’s Book Award. He lives in Bath

Jillian Powell has an MA in English from Cambridge University and an M.Phil in Art History from the Courtauld Institute, London.

She is an experienced writer of children's fiction and non-fiction, and has written on many social issues.

Born in New Zealand, Justin D'Ath was one of twelve children. He came to Australia in 1971 to study for missionary priesthood but after three years, left the seminary in the dead of night and spent two years roaming Australia on a motorbike!

Whilst doing that he began his writing career contributing pieces for motorbike magazines. He published his first novel for adults in 1989 and this was followed by numerous award-winning short stories, also for adults.

Justin has worked in a sugar mill, on a cattle station, in a mine, on an island, in a laboratory, built cars, picked fruit, driven forklifts and taught writing for twelve years. He wrote his first children's book in 1996 and to date he has published over 50 books. He has two children, six grandchildren, and two dogs.

Connah Brecon is a British author-illustrator currently living in Melbourne, Australia, with his family.

Although Connah is yet to be a Grandpa, he has many fond memories of his very own Wild Pa.

Alix Nathan read English and Music at York University. She lives in the Welsh Marches where she owns some ancient woodland with her husband. Her short stories have been published in Ambit, The London Magazine, New Welsh Review and read on BBC Radio 4. Her last two books were published by Parthian Press.

David's first collaboration with Julia Donaldson - Tyrannosaurus Drip - was published in 2007 by Macmillan, and since then they have worked together on several other picture books.

David is also the illustrator of the New York Times bestselling Rosie Revere, Engineer and Ada Twist, Scientist written by Andrea Beaty. David Roberts has been fascinated by the suffragists since his school days, and his illustrated history of the fight for women's suffrage is a real passion project.

Adam Ford is an ordained Anglican priest, now retired. He has an MA in Indian religions and regularly lectures on Buddhism and Hinduism.

Jean Ure was born and brought up in the suburbs of London. She wrote her first novel at 16 years old and has been writing ever since.

Jean enjoys writing books for young girls that deal with real issues in a warm and insightful way. She lives with her husband and their large family of rescued cats and dogs in South London.

Roger Jones is a writer and editor specializing in careers, living and working abroad, and music. A graduate in modern languages from King's College, London University, he has worked abroad in Europe, the Middle East and Southeast Asia, and in refugee welfare and education in the UK.

He has written over fifteen handbooks including Culture Smart! Western Europe and Culture Smart! Libya, and two novels. He also writes and edits music reviews for an international classical music Web site, is a longstanding member of the Society of Authors, and plays an active role in civic amenity groups. He lives in Gloucestershire, UK.

Kate Simpson grew up on a diet of Little Women, Anne of Green Gables and anything written by Enid Blyton, but it didn't occur to her to try her own hand at writing children's books until she was in her thirties. Now she's hooked, and with two small children of her own, she finds she's never short of inspiration.

As well as being a picture book author and incurable bookworm, Kate is also a co-host of the children's book podcast One More Page, where she happily spends an hour a fortnight interviewing fellow book-folk and talking all things children's books.

Ann Turnbull knew from an early age that she wanted to be a writer. After working as a secretary for many years, Ann returned to studying and started to train as a teacher.

It was then that she rediscovered children's literature and began writing for children herself.

Her first novel was published in 1974 and she is has now written more than thirty books for children and young adults, with shortlistings for the Guardian Children's Book Prize and the Whitbread Children's Book Award.

Be the first to review Plant Attack. 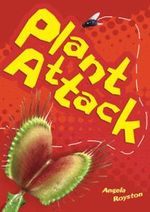 by Rob Childs, Peter Foster,  Julia Donaldson and others