Sir James Wordie-Exploring the Arctic and the Antarctic

Sir James Mann Wordie, born in Glasgow in 1889, was the elder statesman of polar exploration - the link between the heroic Edwardian Age of Shackleton and Scott and the mechanised modern era which opened up Antarctica and the Arctic. The remarkable life of one of Scotland's gratest heroes remains surprisingly little known; although resolute and ambitious (perhaps even scheming), he shunned publicity and popular fame. Wordie's career as both explorer and academic geologist opened with his participation in Shackleton's epic Endurance expedition of 1914-16, where he proved one of the most resilient of those stranded in appalling conditions on Elephant Island. He continued to lead arduous expeditions to the Arctic well into his forties, while building his reputation as an academic and mentor to new generations of explorers and mountaineers. British strategic interests in the Antarctic territories, and later rose to be President of the Royal Geographical Society and Master of St John's College, Cambridge. He died in 1962. This is the first full biography of Wordie to be written, and it makes use of a wide variety of official sources, of the personal recollections of family, friends and colleagues, and of previously unpublished papers and diaries, most notably those of Wordie himself, including the log he kept of the Endurance expedition. expeditions, many of them previously unpublished. Michael Smith's book captures all the drama of an extraordinary life lived at the edge and will go a long way in establishing James Wordie in his rightful place in the pantheon of great British explorers.

Michael Smith is a former member of the Intelligence Corps.

He now writes on espionage for the Daily Telegraph, where he is a senior reporter. He lives in Oxfordshire.

Be the first to review Polar Crusader. 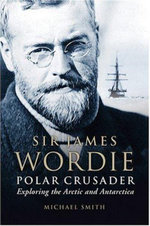 Biography: historical Biography: general Geographical discovery & exploration History of other lands
Hold on while we process your request.