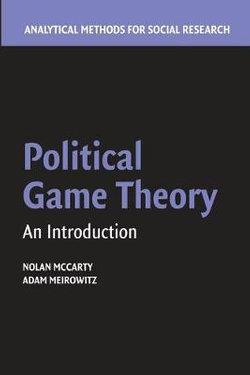 by Adam Meirowitz and Nolan McCarty
Paperback
Publication Date: 30/10/2014
Be the first to write a review
Tweet
$74.95

Political Game Theory is a self-contained introduction to game theory and its applications to political science. The book presents choice theory, social choice theory, static and dynamic games of complete information, static and dynamic games of incomplete information, repeated games, bargaining theory, mechanism design and a mathematical appendix covering, logic, real analysis, calculus and probability theory. The methods employed have many applications in various disciplines including comparative politics, international relations and American politics. Political Game Theory is tailored to students without extensive backgrounds in mathematics, and traditional economics, however there are also many special sections that present technical material that will appeal to more advanced students. A large number of exercises are also provided to practice the skills and techniques discussed.

Be the first to review Political Game Theory.

by Adam Meirowitz and Nolan McCarty