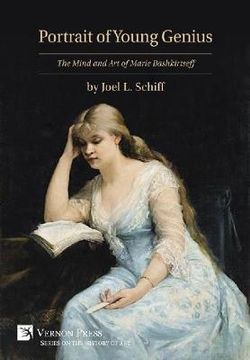 Portrait of Young Genius ? The Mind and Art of Marie Bashkirtseff

Marie Bashkirtseff was of one of the most extraordinary women of the 19th century. Her Journal (originally comprising some 20,000 hand-written pages but pared down to a few hundred for publication) was a cause cElEbre after her death and continues to be an inspiration to the Women's Movement to this day. It also inspired such great writers as AnaIs Nin and Katherine Mansfield among many others.

Born into an aristocratic family in a village in Ukraine the family soon settled in France, first in Nice and later in Paris. Taught entirely by tutors Marie spoke multiple languages, played numerous musical instruments and longed for a singing career on the stage. An illness that affected her throat made her change course and she took up painting for which she had a latent talent. As a student at the AcadEmie Julian in Paris she was soon exhibiting at the annual Paris Salon, the premier venue for artists.

But it was her personality that makes Marie Bashkirtseff such an exceptional individual. At a very young age she was already exhibiting in her Journal the thoughts of a learned philosopher, wrestling with the nature of God, the position of women in society, the politics of men. Having contracted tuberculosis in early childhood she ceaselessly strove to shrug it off in her quest to achieve greatness. In the end, a great tragedy unfolds.

The book is somewhat unique in format. The first part is a biographical section that describes Marie's unusual and fascinating life. Then a second section, consists of a single Journal excerpt (in English translation from the original French) on each left-hand page, juxtaposed with one of her outstanding works of art on the facing page. In this manner, we learn about her remarkable life and tribulations, enter her restive and brilliant mind via her Journal, as well as appreciate her exceptionally fine works as an artist.

Be the first to review Portrait of Young Genius ? The Mind and Art of Marie Bashkirtseff.

Portrait of Young Genius ? The Mind and Art of Marie Bashkirtseff