Evangelical Outreach and Performance Activism in a Secular Age

Preaching to Convert offers an intriguing new perspective on the outreach strategies of U.S. evangelicals. Author John Fletcher frames these activities, from door-to-door proselytising to the spirited sermons of superstar televangelists, as examples of activist performance, broadly defined here as acts performed before an audience in the hopes of changing hearts and minds. Most writing about activist performance has focused on left-progressive causes, events, and actors, and if evangelicals have appeared at all, they often appear as one-dimensional forces of ignorance or bigotry against which brave (left-leaning) activists must fight. Preaching to Convert argues against such a constricted view of activism and for a more nuanced understanding of U.S. evangelicalism as a movement defined by its desire to win converts and spread the gospel. In other words, evangelicals are activist performers par excellence.

The book positions evangelicals as a diverse, complicated group confronting the loss of conservative Christianity's default status in 21st-century U.S. culture. In the face of an increasingly secular age, evangelicals have been reassessing models of outreach. In acts like handing out Bible tracts to strangers on the street or going door-to-door with a Bible in hand, in elaborately staged horror-themed morality plays or multi-million-dollar creationist discovery centres, in megachurch services beamed to dozens of satellite campuses, and in controversial "ex-gay" ministries striving to return gays and lesbians to the straight and narrow, evangelicals are redefining what it means to be deeply committed in a pluralist world. The book's engaging style and careful argumentation make it accessible and appealing to scholars and students across a range of fields.

Be the first to review Preaching to Convert. 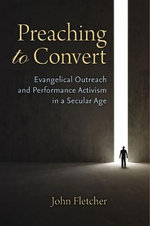