A Gritty Edinburgh Mystery of Crime and Murder

Private Investigations is Quintin Jardine's twenty-sixth Bob Skinner mystery that sees the Edinburgh sleuth plunged into a gruelling new case in which no score will go unsettled.

A thrilling mystery for fans of Ian Rankin and Peter Robinson.

Former Chief Constable Bob Skinner has uncovered his fair share of shocking crime scenes over his thirty-year career. But none could prepare him for the sight he finds stowed in the back of a stolen car that collides with his on the outskirts of Edinburgh.

As his former colleagues investigate, Skinner takes on an unusual commission of his own.

The body count rises, motives appear, the hunt goes global, and potential conflicts surface. In his new guise, is Skinner is on the side of the angels...or working against them?

Quintin Jardine was born once upon a time in the West - of Scotland rather than America, but still he grew to manhood as a massive Sergio Leone fan. On the way there he was educated, against his will, in Glasgow, where he ditched a token attempt to study law for more interesting careers in journalism, government propaganda, and political spin-doctoring.

After a close call with the Brighton Bomb in 1984, he moved into the even riskier world of media relations consultancy, before realising that all along he had been training to become a crime writer. Now, forty novels later, he never looks back.

Along the way he has created/acquired an extended family in Scotland and Spain. Everything he does is for them.

Be the first to review Private Investigations (Bob Skinner Series. 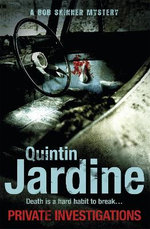 Crime & Mystery Tartan Noir
Hold on while we process your request.