by Steve Cole, Joanna Nadin,  Andy Briggs and others

The Dare to Succeed collection of texts provides children with the perfect foundation for practising the 10 comprehension strategies in Project X Comprehension Express. There are 9 texts in the collection covering highly-engaging fiction and non-fiction. Each text is carefully levelled to be accessible to every child - including those just behind age-related expectations. This collection of texts is part of Project X Comprehension Express. It is
a whole-class teaching programme specially built to help children in Years 4-6 (P5-P7) master comprehension and excel in the new National Reading Test. It includes Handbooks, Workbooks, Expert Tip flashcards
and an Expert Tip poster. Online teaching resources and best practice films are available on www.oxfordowl.co.uk to ensure its easy implementation.

Steve Cole is a best-selling children’s author whose sales exceed three million copies. His hugely successful Astrosaurs young fiction series has been a UK top-ten children’s bestseller and been published widely internationally. His several original Doctor Who novels have also been bestsellers.

An original comedy, fantasy and adventure writer, Steve’s work includes a broad range of books, most recently the Secret Agent Mummy series for younger readers, Stop Those Monsters! and the explosive Young Bond titles Shoot to Kill and Heads You Die, with a further adventure for the teenage James Bond planned for publication later this year.

Much in demand for his energetic performances at events, Steve has appeared at Edinburgh, Hay, Cheltenham, Oxford, Bath, YALC and World Book Day’s Biggest Book Show on Earth. He has toured schools in Europe, America, the UAE, Australia and New Zealand, and featured at sci-fi and Doctor Who conventions from London to Los Angeles.

She has been shortlisted for the Booktrust Best Book Award and Queen of Teen, and Spies, Dad, Big Lauren and Me was selected for the Richard and Judy Book Club.

In 2011, Penny Dreadful is a Magnet for Disaster was shortlisted for the Roald Dahl Funny Prize. Joe All Alone was nominated for the 2016 CILIP Carnegie Medal.

She writes the Flying Fergus series with Sir Chris Hoy. Joanna previously worked as a policy writer for the Labour Party and a special adviser to the Prime Minister.

She continues to freelance as a speechwriter and editor, and lectures in Creative Writing at Bath Spa University.

Andy is a screenwriter, graphic novelist and author - writing on movie projects such as "JUDGE DREDD" and "FREDDY VS JASON" and "FOREVERMAN" for Spiderman creator Stan Lee and legendary producer Robert Evans. He went on to work on Warner Bros. "AQUAMAN" - while at the same time landing an eight-book deal with Oxford University Press for "HERO.COM" and "VILLAIN.NET". His graphic novels include KONG: KING OF SKULL ISLAND, RITUAL and DINOCORPS for Markosia Comics.

He has recently rebooted the classic character TARZAN, with his new books TARZAN: THE GREYSTOKE LEGACY and TARZAN: THE JUNGLE WARRIOR. WARRIOR NUMBER ONE is his first book with Franklin Watts.

Alex was a soldier and a jungle leader before concentrating on his illustration career: following in the footsteps of his sister and cousin who are also both children's illustrators. He has had eleven books published so far. Alex lives in a little village in Warwickshire with his wife Sarah.

Be the first to review Project X Comprehension Express: Stage 3: Dare to Succeed Pack of 15. 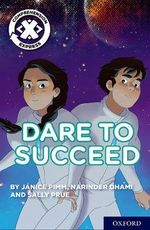 by Steve Cole, Joanna Nadin,  Andy Briggs and others