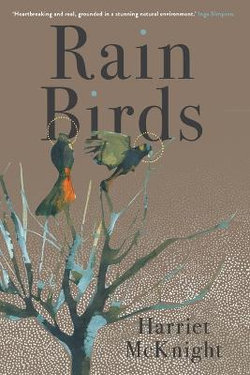 Alan and Pina have lived in isolated Boney Point for thirty years.

Now they are dealing with Alan’s devastating early-onset Alzheimer’s diagnosis. As he is cast adrift in the depths of his own mind, Pina is left to face the consequences alone, until the arrival of a flock of black cockatoos seems to tie him, somehow, to the present.

Nearby, conservation biologist Arianna Brandt is involved in trying to reintroduce the threatened glossy black cockatoos into the wilds of Murrungowar National Park. Alone in the bush, with her birds failing to thrive, Arianna’s personal demons start to overwhelm her and risk undoing everything.

At first, when the two women’s paths cross, they appear at loggerheads, but are they ultimately invested in the same outcome, even if for different reasons? Rain Birds is an accomplished and unforgettable novel examining personal tragedy as set against global and environmental responsibilities, and how we negotiate our often-conflicting ideals.

‘Heartbreaking and real, grounded in a stunning natural environment. McKnight questions our responsibilities to loved ones, and to places we love.’ – Inga Simpson

‘A poetic and powerful portrayal of how hard it is for humans to change even while the world changes around us. Rain Birds is a moving meditation on the deeply intimate kinds of loss experienced within families, and the harrowing losses our entire planet is facing.’ – Ceridwen Dovey

‘With a delicate yet decisive hand, Harriet McKnight deftly weaves the stories of two forthright women searching for moments of stillness in an ever-changing world. Intelligent and absorbing, Rain Birds eschews sentiment in favour of clear-eyed empathy for its characters.’ – Melanie Joosten

She works as Managing Editor of The Canary Press. Rain Birds is her debut novel.

Be the first to review Rain Birds.