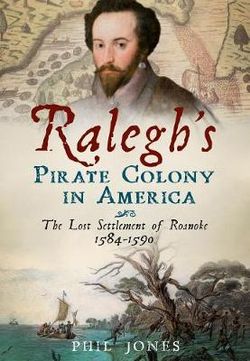 The lost colony of Roanoke Island, North Carolina, was England's first experiment in civilian empire building and the first attempt at peaceful co-existence between Native Americans and the English. It disappeared without trace, defeating intense efforts to find it. One hundred and twelve men, women, and children were abandoned there. The only man to risk his life in the battle to get relief supplies to the colony was John White, Roanoke's unlikely choice for governor and, in the end, its sole survivor. This new account of the tragedy gives a convincing explanation of how the project was doomed from the start. Phil Jones sets the tragedy in its global context and lays bare the myth of Elizabethan sea power, examining the true motives of its supposedly selfless heroes, who conveniently managed to reconcile patriotism with profiteering. With officially sanctioned piracy and plunder the only incentive for sailors in a private-enterprise war against Spain, it is hardly surprising that making money became the overriding priority to which everything else was sacrificed. The subsequent search for them among the local Indian tribes brought to light a grisly tale of ethnic cleansing. It heralded a race war of genocidal proportions, as Europeans and Native Americans fought for the control of a continent, a battle in which imported alien disease, rather than the superiority of European technology and culture, was triumphant.

Be the first to review Ralegh's Pirate Colony in America.