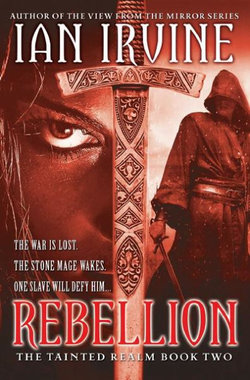 The war has been lost. Hightspall has fallen. The Cythonian enemy, led by their reincarnated sorcerer-king, Lyf, are determined to wipe it off the map and build their ancient realm anew. TALI, an escaped slave who bears the master pearl within her, is held captive by an embittered chancellor so he can take her healing blood. RIX, now known as Deadhand, has lost everything and is running for his life. He is determined to redeem himself and save his beloved country, but an obsession with his ancestor Axil Grandys, the legendary founder of Hightspall, is leading Rix on a one-way path to catastrophe. When Tali discovers that her enslaved people face genocide at the hands of the enemy, she conceives a desperate plan. To sneak into Cython, rouse the slaves to rebellion and use the master pearl to attack the enemy from within. But before she can hope to save her people, Tali has to confront her own darkest fear - a return to slavery.

Ian Irvine is a marine scientist and fantasy writer who has written twenty-six novels.

His three fantasy series, The View from the Mirror, The Well of Echoes and Song of the Tears, are international bestsellers.

He has also written a near-future eco-thriller trilogy about catastrophic climate change, Human Rites, recently republished in an updated edition, plus eleven novels for children in the Runcible Jones, Sorcerer's Tower and Grim and Grimmer series.

Be the first to review Rebellion.