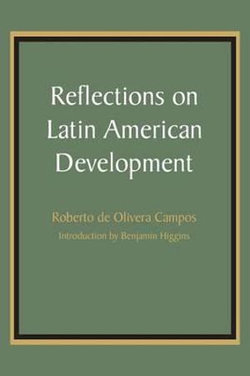 Economic development has been an challenge facing the countries of Latin America. Because the United States, from the very nature of its geographic and economic relationship with its southern neighbors, must inevitably exercise a strong influence on the course which that development takes, it is important that North Americans understand conditions in Latin America and the attitudes of its peoples. Roberto de Oliveira Campos, former Brazilian Minister of Economic Planning, is in a unique position to evaluate both past accomplishments and future problems.

In this group of essays, Campos gives a comprehensive analysis of many aspects of Latin American development in the mid-twentieth century. He examines relations between the United States and Latin America from a variety of angles, and he outlines the basic problems of economic development, of governmental policy, and of public and private administration. He gives particular attention in several essays to the relationship of foreign trade and foreign aid to economic development, and he presents a long discussion of the Alliance for Progress--its history, its purposes, its accomplishments, and its failures.

Campos's philosophy regarding the role of the state in economic development and other questions emerges clearly from these pithy essays. "The valid distinction I see on the basis of my analysis of men and things is between pragmatic or functional nationalists and romantic or temperamental nationalists," he writes. "The latter confuse intention with results. They start with enthusiasm and end in fanaticism, this being, according to Santayana, 'the art of redoubling efforts after losing sight of objectives.' . . . Many romantic nationalists], though they do not confess it, favor the dangerous purgery of revolution.

"The pragmatic nationalist seeks to operate within the frame of democratic institutions and prefers reform to revolution. As to myself, I shall continue considering myself a pragmatic nationalist. I renounce the temptation of mobilizing resentment in order to gain the authority to plan development. I would rather strengthen the national entrepreneur than merely antagonize the foreigner. I would want the state not to do what it cannot do in order to do what it should do. I prefer to love my own country rather than to hate the others'."

Be the first to review Reflections on Latin American Development.