The Man Who Changed the Way We Eat

Ferran Adrià has done things with food never dreamed of or attempted before.

He has created thousands of new dishes, and designed new implements for eating them. His influence over the culinary world is unmatched. His story is entwined with the rise of elBulli: with no formal culinary training, Ferran Adrià took a traditional restaurant perched on a remote Catalan clifftop, and placed it in the centre of the culinary map. Ferran takes a fresh look at the restaurant that has held three Michelin stars for over a decade, and receives over 2 million request for the 8,000 places served each year.

The legendary multi-course menus of elBulli are developed by Ferran and his team over months of laboratory experimentation. This unique approach gives elBulli’s food an alchemy all its own; for example, tortilla espanola, or Spanish tortilla, becomes a riot of flavour and texture with potato foam, onion purée and egg-white sabayon, through evolving cooking methods that influence the restaurant menus around the world.

Reinventing Food charts Adrià’s transition from comparative obscurity to becoming the focus of massive media attention he has been admired, talked about, criticised more than any other chef alive today. Colman Andrews has spent over a decade in conversation with Ferran, as well as countless hours in his restaurant and workshop, and his account recasts Ferran’s remarkable career trajectory on an absorbing, human scale.

With unrestricted access to the chef and his family and friends, as well as decades of accumulated insights and interviews with the most prominent chefs and critics, Reinventing Food sheds new light on the most radical culinary innovator of our times. Lively and readable, and full of fresh insights, it will engage not just food-lovers of food, but anyone who enjoys a remarkable story: the story of how one young chef changed the gastronomic world, and reinvented food.

Colman Andrews is an award-winning food writer, restaurant reviewer and gastronomic commentator based in the USA.

His previous books include Reinventing Food Ferran Adrià: The Man Who Changed The Way We Eat, also published by Phaidon.

He co-founded Saveur magazine and acted as editor-in-chief for four years (collecting six James Beard Journalism Awards), and went on to be a contributing editor for Gourmet magazine.

He is also editorial director at the food blog TheDailyMeal.com.

Be the first to review Reinventing Food Ferran Adrià. 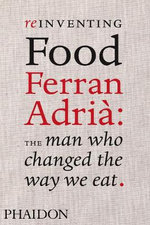