My Story of Love, Loss, and the Night the Music Stopped

Contemplative and private, Cissy Houston has said little publicly about her daughter Whitney's tragically early death. She hasn't spoken to the press about the funny, warm memories from her daughter's childhood or the lovely, quiet moments the two shared as Whitney became a woman-much less the trying and troubling times when Cissy and her family tried to save the superstar's life while it careened out of control.

Now, for the first time, Cissy will tell the unabridged and unbelievable story of her daughter's life as well as her own, addressing Whitney's brightest and darkest moments while helping fans around the world understand the complexities of this extraordinary star who died much too young. A legendary gospel singer in her own right, Cissy shows how the lessons from her musical journey helped to shape Whitney's career-from teaching Whitney to use her voice, to witnessing Whitney's first experiences in the music business, to keeping her daughter level-headed throughout her meteoric rise to fame.

However, Cissy does not shy away from the difficult realities of her daughter's life.

Offering an insider's perspective unlike any other, she sets the record straight about Whitney, exploring both her turbulent marriage and her misunderstood struggles with drug abuse with a candor, honesty, and respect that have long been missing accounts of Whitney's life. Ultimately, Cissy goes behind the tabloid headlines to show the true, human side of this strong, successful, yet flawed musical icon, capturing the dramatic depths and soaring range of an extraordinary woman, along with the pain and heartbreak of a grieving mother as she struggles with an impossible loss.

Be the first to review Remembering Whitney (Large Print). 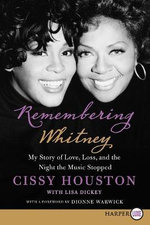