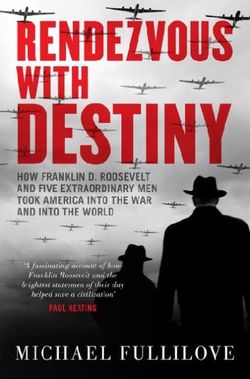 How Franklin D. Roosevelt and Five Extraordinary Men Took America into the War and into the World

The period between Hitler's invasion of Poland and the attack on Pearl Harbor was the turning point of the twentieth century. While the American public and Congress were eager to isolate themselves from the conflict, President Franklin D. Roosevelt wanted to bring their considerable might to the aid of the Allies.
To build a case, Roosevelt threw out the diplomatic playbook, turning to five unlikely men, only one of whom had any diplomatic background, and sent them on a series of remarkable journeys: Sumner Welles, the diplomat whose buttoned-down appearance belied a libertine spirit, who met with Mussolini, Hitler and Chamberlain in the spring of 1940, but failed to broker a peace deal; William 'Wild Bill' Donovan, war hero and future spymaster, who visited Britain in the summer to determine whether Churchill could hold out against the German advance, and convinced FDR that America's help was needed; Harry Hopkins, the frail social worker, sent to Churchill to explain the Lend-Lease deal that would make America the 'Arsenal of Democracy', and whose later meeting with Stalin, after Hitler's invasion of Russia, gave Roosevelt the confidence to gamble on aiding the Soviet Union; Averell Harriman, the ambitious banker and railroad heir, dispatched to run the massive aid program out of London; and Wendell Willkie, the charismatic man FDR had just defeated in the presidential election, whose visit to London and Dublin lifted British morale and bound Americans to the cause.
Roosevelt's five emissaries are unforgettable characters. Taken together, their missions plot the arc of America's transformation from a reluctant middle power into a global leader. Drawing on vast archival research, historian Michael Fullilove has rescued these men and their missions and given them back to history. At the centre of everything, of course, is FDR himself, who moved his envoys around the globe with skill and elan. Rendezvous with Destiny is narrative history at its most delightful, stirring and important.

Be the first to review Rendezvous with Destiny.