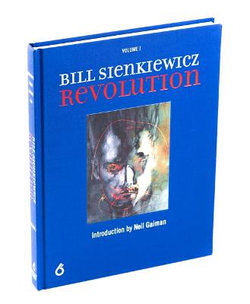 by Ben Davis, Guillermo del Toro,  Frank Miller and others

Bill Sienkiewicz (pronounced sin-KEV-itch) is an Eisner-winning, Emmy-nominated artist best known for revolutionizing the way comic books are drawn and made. His work has graced the National Museum of Fine Arts in Rio de Janeiro, Brazil; art galleries in Paris, Barcelona, and Tuscany; and advertising campaigns for Nike, MTV, Nissan, the 2006 Winter Olympics, and dozens of Hollywood movies.

Sienkiewicz is a classically trained painter whose artworks incorporate abstract and expressionist influences and combine oil painting, acrylics, watercolor, mixed media, collage, and mimeograph. Bill Sienkiewicz: Revolution is the first time the artist's work and career have been taken out of the limited context of comic books and evaluated as fine art. Ben Davis, award-winning Senior Writer for Artnet News, considers Sienkiewicz's process and places him within the context of art and popular culture. Edited by Sal Abbinanti, Sienkiewicz's representative and colleague for 12 years, Bill Sienkiewicz: Revolution features an introduction by Neil Gaiman, who collaborated with Sienkiewicz on the New York Times bestseller The Sandman, and an interview in which the artist explains his influences and techniques and offers his view on the future of comic book art.

"Bill sees clearly, paints beautifully. . . . He's not an unacknowledged genius. He is Bill Sienkiewicz, and he's up on the pedestals already. He is acknowledged. But my hope is that a book like this, filled with Bill's art all in one place, will show people who think they know what Bill can do exactly how much more he can do than any of them had ever dreamed." -- Neil Gaiman, author of The Sandman Bill Sienkiewicz's first art book is a 9.5 x 12", 224-page hardcover book, covered in luxurious 100% cloth fabric, with two embossed, tipped-in images on the front and back cover.

Guillermo del Toro is the award-winning director of Pan's Labyrinth, Hellboy and Pacific Rim, and screenwriter of the recent 'Hobbit' film adaptations.

Together with Chuck Hogan, del Toro wrote The Strain trilogy, which the authors are currently producing as a cable series for FX Networks.

Be the first to review Revolution. 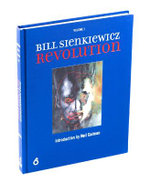 by Ben Davis, Guillermo del Toro,  Frank Miller and others