The Castle Crydee has stood strong against a multitude of enemies over the years, and has kept its people safe. But now, a new enemy from another world threatens to destroy them, and Prince Arutha, Swordmaster Fannon, and Squire Roland struggle to keep them at bay. Meanwhile, Pug, apprentice to the magician Kulgan, goes on an offensive with his master and a band of soldiers into the heart of the enemy camp. It's a daring challenge, one that will ultimately prove fatal for one of them, and change the course of the other's life. This title collects "Riftwar" numbered 1-5.

Be the first to review Riftwar. 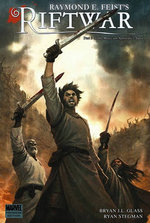