by Hilton Kelliher and Stephen Knight

The discovery of the Forresters Manuscript in 1993 cast new light on the Robin Hood ballad tradition. Dating from about 1670, it contains twenty-one ballads, with two versions of one, providing texts clearly superior to those available in Child's classic ballad collection: for example, the action of Robin Hood and Queen Katherine and The Noble Fisherman, obscure for centuries, is now clear in versions fuller than those apparently cut down to fit the size for broadside publication.Other Forresters texts of high interest are radically variant texts of Robin Hood and Allin a Dale, Robin Hood and the Bishop and The King's Disguise and Friendship with Robin Hood, the last two offering texts some seventy years earlier This edition offers a full diplomatic text in original spelling with light modern punctuation, textual introductions, notes on text and meaning, glossary and bibliography. A General Introduction discusses the tendencies of the manuscript asa whole, and a Manuscript Description is provided by HILTON KELLIHER, Keeper of Western Manuscripts at the British Library.STEPHEN KNIGHTis Professor of English Literature at the University of Wales at Cardiff. 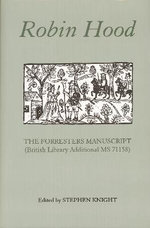 by Hilton Kelliher and Stephen Knight