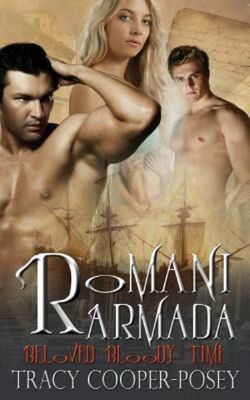 by Tracy Cooper-Posey
Paperback
Publication Date: 05/09/2013
Be the first to write a review
Tweet

Justin Edward Kelly, vampire and Chronologic Touring Agency member, hates time traveling and prefers to pretend he's human. Deonne Rinaldi is human and arm-twisted the Agency into the deal of a life-time: They make her a vampire if she pulls off the PR campaign of her career and make humans like vampires. Everyone was stunned when the mismatched pair became lovers, including Deonne and Justin and neither of them will admit even to themselves how well the relationship works.

While Deonne is tucked away in history to protect her from Gabriel's psi-file army ravages, Justin gets a time-delayed letter from her telling him their affair is over. She is in love with Ad n Xavier Santiago, a Romani vampire from ancient Spain who will turn her.

Despite the massive dangers screwing with time this way can cause, Justin travels back to China to confront Deonne, but when he arrives there is no Ad n and Deonne knows nothing about the letter. Justin, not used to time traveling, figures he's averted a personal disaster until Deonne meets a sexy Spaniard who introduces himself as Ad n....

The storylines are creative, the characters surprise us - over and over again. Reading Romances

The world of time traveling vampires and the Chronometric Conservation Agency is so well conceived and written. I promise, no matter how much you read, this is a unique world. This complex world is well written and presented in a manner that didn't overwhelm me. The Romance Reviews

I've never been a fan of futuristic, sci-fi or time-travel books, but the characters and worlds that Tracy builds for her readers is impossible not to love. ... I can't wait for this series to continue. There are so many different ways that Tracy Cooper-Posey could take this storyline and if history truly does repeat itself, I'm positive she won't disappoint. Vampire Romance Books

The storyline is incredible. I must confess I'm dying to read the next book in the series! Booked Up Reviews

Tracy Cooper-Posey's intriguing characters will quickly make their way into your hearts and wanting more of her time traveling vampires! Romancing the Darkside

Be the first to review Romani Armada.