Settling in an isolated desert valley, Salt Lake City's Mormon pioneers laid out a city grid and constructed permanent structures to create their version of Zion. They brought with them their architects, builders, tools, and experience gained in the Midwest. Within a decade, the fast-growing community had created religious, business, and residential centers with Greek- and Gothic Revival-style structures built of stone and adobe. With the arrival of the railroad, urban architects, and a sizable "gentile" (non-Mormon) population in the 1860s, the city's architecture suddenly diversified in scale, style, and material. By the 1890s, virtually every American style was represented and impressive landmarks were found citywide. This trend continued throughout the early 20th century as talented architects designed in a rich variety of architectural expressions. Although several important buildings are lost, many remain and are now restored. In this book, Salt Lake City's legacy of historic governmental, religious, commercial, industrial, educational, social, and residential architecture--from 1850 through 1930--is pictured and described.

Be the first to review Salt Lake City's Historic Architecture. 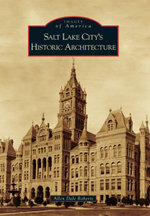 History of the Americas Local history
Hold on while we process your request.