And Other Poems (Classic Reprint)

Excerpt from Sarah Rae: And Other Poems Hugh Miller, and acquired a passion for the study or botany, which was to him a source of life-long pleasure. Later on he gained a prize also in the class of Professor Wilson, and when the great 'christopher paid a visit to Galloway, the old student became his host and guide. Soon after license as a preacher of the Gospel, he received an appointment as assistant and successor to the Rev. Gavin Cullen, minister of Balmaclellan - the presentation being from the Crown, and the first granted by Queen Victoria. The 'ten years' conflict' was then raging, and in this the young minister followed steadfastly the Constitutional' party, and adhered to the Establish ment. After the Disruption, he was transferred to the parish of Girthon, in the same county, and there laboured with marked success for eight years. Thereafter, by a strange coincidence, he was again called to Balmaclellan - on this occasion as full minister, in succession to the Rev. William Wilson. There in his much - loved native Glenkens, he continued a faithful pastor until death - April 22, 1881, in the sixty-ninth year of his age, and forty fourth of his ministry. Brimful of life and energy, he was not a man whose influence could be confined simply to his own parish, and having a marked business talent, and being prompt and thorough in everything he took in hand, he, in ecclesiastical, county, and local matters, held important offices - being Clerk, for instance, of both Presbytery and Synod.

Be the first to review Sarah Rae. 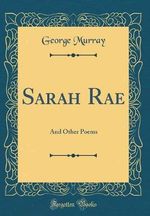 Poetry Poetry by individual poets History General & world history
Hold on while we process your request.