Be the first to write a review
Tweet
$62.90
This item qualifies for FREE delivery

The first substantial monograph on an artist whose sculptures capture the proliferation of information and objects in contemporary life.

Sarah Sze (b. Boston, 1969, lives and works in New York) has developed a sculptural aesthetic that transforms space through radical shifts in scale, colonizing peripheral spaces, engaging with the history of a building, and altering the viewer's perception and experience of architecture through large, site-specific interventions. Known for her unexpected and carefully arranged combinations of materials, from cotton buds and tea bags to water bottles and ladders, light bulbs and electric fans, Sze has presented ephemeral installations that penetrate walls, suspend from ceilings and burrow into the ground. Her work exists at the intersection of sculpture, drawing and architecture where her formal interest in light, air and movement is coupled with an intuitive understanding of colour and texture.

Like the scientific instruments of measurement they often reference, Sze's sculptures attempt to quantify and organize the universe, ascribing a fragile, personal system of order. Within her practice, sculpture becomes both a device for organizing and dismantling information and a mechanism to locate and dislocate oneself in time and space.

Sze received a BA from Yale University in Connecticut in 1991 and an MFA from New York's School of Visual Arts in 1997. She is represented by Tanya Bonakdar in New York and Victoria Miro in London. In 2013 she represented the United States at the 55th Venice Biennale. She was the recipient of a MacArthur Fellows Program Genius Grant in 2003 and of the AICA Award for Best Project in a Public Space in 2012.

Okwui Enwezor is a poet, a critic and the curator of many influential exhibitions including Documenta 11 in Kassel, Germany, in 2002.

He is Visiting Professor at the Universities of Columbia, Pittsburgh, and Illinois at Urbana-Champaign.

Be the first to review Sarah Sze. 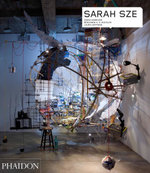 Individual artists Phaidon Art
Hold on while we process your request.