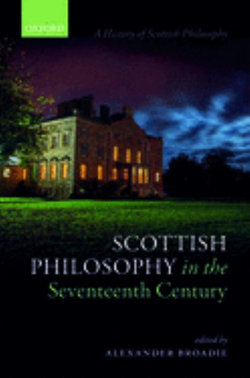 Scottish Philosophy in the Seventeenth Century

During the seventeenth century Scots produced many high quality philosophical writings, writings that were very much part of a wider European philosophical discourse. Yet today Scottish philosophy of the sixteenth and eighteenth centuries is widely studied, but that of the seventeenth century is only now beginning to receive the attention it deserves. This volume begins by placing the seventeenth-century Scottish philosophy in its political and religious contexts,
and then investigates the writings of the philosophers in the areas of logic, metaphysics, politics, ethics, law, and religion. By the early eighteenth century Scotland was well placed to give rise to
the spectacular Enlightenment that then followed, and to do so in large measure on the basis of its own well-established intellectual resources. Among the many thinkers discussed are Reformed orthodox, Episcopalian, and Catholics philosophers including George Robertson, George Middleton, John Boyd, Robert Baron, Mark Duncan, Samuel Rutherford, James Dundas, George Mackenzie, James Dalrymple, and William Chalmers.

Be the first to review Scottish Philosophy in the Seventeenth Century.

Scottish Philosophy in the Seventeenth Century