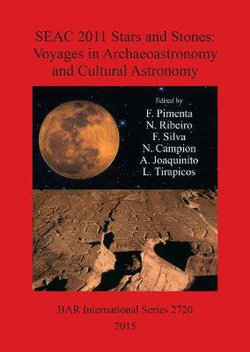 SEAC 2011 Stars and Stones - Voyages in Archaeoastronomy and Cultural Astronomy

Proceedings of the SEAC 2011 Conference

Proceedings of the SEAC 2011 conference.

Since Prehistory, the sky has always been integrated as part of the cosmovision of human societies. The sky played a fundamental role not only in the orientation of space, time organization, ritual practices or celestial divination, but also as an element of power. Migrations and voyages are intrinsic to humankind, they opened the routes for cultural diffusion and trade, but also for power dominance. Following these routes is also to follow cultural diversity and how human societies met or clashed. The sky and astronomical phenomena provided the tools for time reckoning, calendar organization and celestial navigation that supported those voyages. Astronomy today gives us the capacity to reproduce the sky, opening a window through which we can glimpse how those societies perceived, integrated and manipulated the sky into their world-views and their myths and, ultimately, into their social organization. The papers presented in this volume were submitted after the 19th meeting of the European Society for Astronomy in Culture, vora, Portugal, 19th-23rd September, 2011.

Be the first to review SEAC 2011 Stars and Stones - Voyages in Archaeoastronomy and Cultural Astronomy.

SEAC 2011 Stars and Stones - Voyages in Archaeoastronomy and Cultural Astronomy

by Luís Tirapicos, Nicholas Campion,  Fernando Pimenta and others